The definition of health according to WHO . Health is a state of complete physical, mental, and social well-being and not merely the abs...

"Arise! Awake! And stop not until the goal is reached." 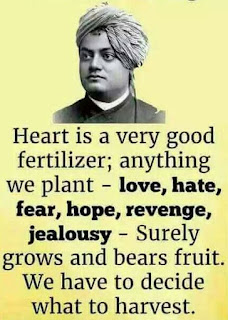 Swami Vivekananda is considered as a key figure in the introduction of Yoga to the Western world. Vivekananda described Yoga as a practice that joins a human to "reality" or "God".
The Hindu concentrated on the internal world, upon the unseen realms in the Self, and developed the science of Yoga. Yoga is controlling the senses, will and mind. The benefit of its study is that we learn to control instead of being controlled. Mind seems to be layer on layer. Our real goal is to cross all these intervening strata of our being and find God. The end and aim of Yoga is to realise God. To do this we must go beyond relative knowledge, go beyond the sense-world. The world is awake to the senses, the children of the Lord are asleep on that plane. The world is asleep to the Eternal, the children of the Lord are awake in that realm. These are the sons of God. There is but one way to control the senses—to see Him who is the Reality in the universe. Then and only then can we really conquer our senses.


Swami Vivekananda has influenced young minds to walk on the path of enlightenment for more than a centennial. Stretching his wings of spirituality out to the world, he started a revolution which still resonates among millions of his followers
Every man must develop according to his own nature. As every science has its methods, so has every religion. The methods of attaining the end of religion are called Yoga by us, and the different forms of Yoga that we teach, are adapted to the different natures and temperaments of men. We classify them in the following way, under four heads:


These are all different roads leading to the same centre—God. Indeed, the varieties of religious belief are an advantage, since all faiths are good,so far as they encourage man to lead a religious life. The more sects there are, the more opportunities there are for making successful appeals to the divine instinct in all men.
Each one of our Yogas is fitted to make man perfect even without the help of the others, because they have all the same goal in view. The Yogas of work, of wisdom, and of devotion are all capable of serving as direct and independent means for the attainment of Moksha. "Fools alone say that work and philosophy are different, not the learned.” The learned know that, though apparently different from each other, they at last lead to the same goal of human perfection.
Without non-attachment there cannot be any kind of Yoga. Non-attachment is the basis of all the Yogas. The man who gives up living in houses, wearing fine clothes, and eating good food, and goes into the desert, may be a most attached person. His only possession, his own body, may become everything to him; and as he lives he will be simply struggling for the sake of his body. Non-attachment does not mean anything that we may do in relation to our external body, it is all in the mind. The binding link of "I and mine" is in the mind. If we have not this link with the body and with the things of the senses, we are non-attached, wherever and whatever we may be. A man may be on a throne and perfectly non-attached; another man may be in rags and still very much attached. First, we have to attain this state of non-attachment and then to work incessantly.
From a young age, he took delight in various subjects, including religion, philosophy, art, literature and social sciences. He was also drawn towards the sacred books of the Hindu religion. Bewitched in the charm of the wandering monks, he started meditating before the idols of Lord Shiva, Lord Rama and Mahavir Hanuman.
Curiosity in his eyes and the desire to get closer to the supreme power, he once asked his Guru, Sri Ramakrishna, “Have you seen God?” Without any qualms, his master replied, “Yes, I have. I see Him as clearly as I see you, only in a much intenser sense.”

what are you looking search here